On the occasion of World Environment Day, some tips for you to protect the environment 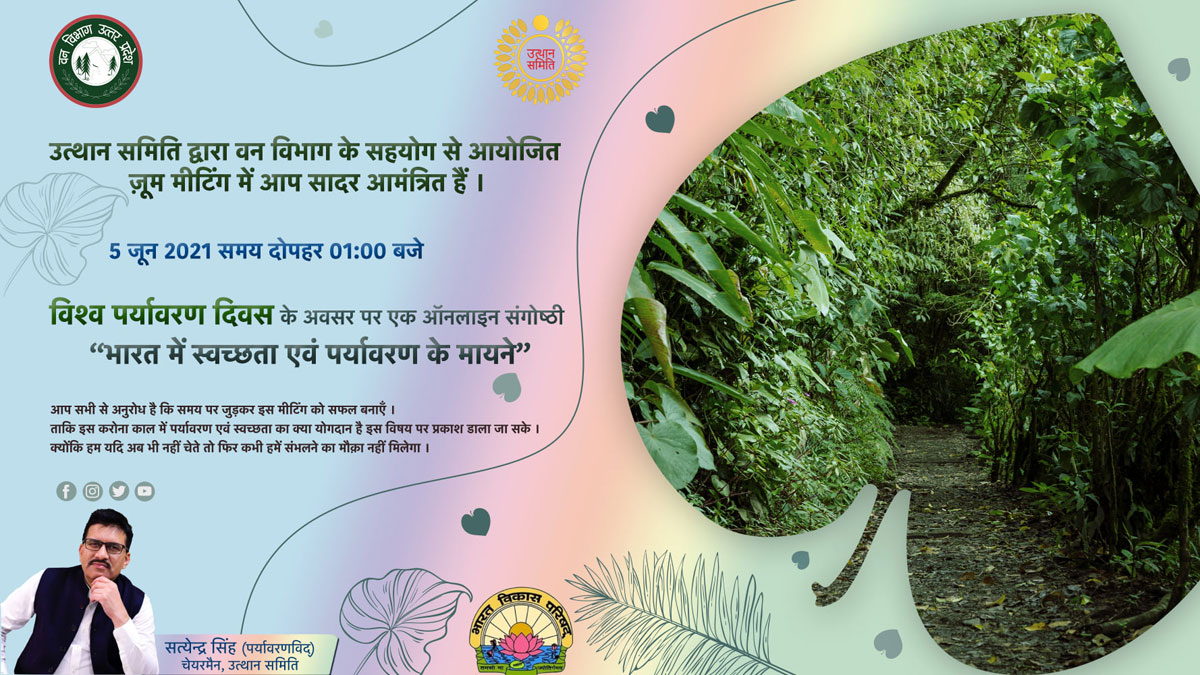 It is impossible to increase the density of forests unless there is a social audit of tree plantation - Satendra Singh (Environmentalist) and member District Ganga Conservation Committee -Ghaziabad.

Every year despite the massive tree plantation drive, the percentage of forests is not increasing due to not working in the right direction, in the right way. Each department is set a target of planting lakhs of trees every year.

But has it ever been considered that where and how many saplings were planted by a particular department? And then took care of them or not? How many of the cultivated plants survived?

It is not possible until these questions are answered. And for this, it is essential to get a social audit done by an NGO or any other competent person so that transparency is maintained, and it can also be known that if the plants do not grow, what was the reason? And knowing that reason can resolve it. Only then the tree plantation campaign will gain momentum.

Along with this, we should plant timber trees more and not bushy plants. Suggestions have been sent to Prime Minister Narendra Modi by Satendra Singh (Environmentalist) and member District Ganga Protection Committee - Ghaziabad to protect our environment by planting trees in the right direction at the right time. We have to cultivate such plants which give more oxygen like Peepal, Banyan, Pilkhan, etc.

The officers of the departments are also working, but if the same work is done in the right direction, it is inevitable to get their results.

Conservation of the environment and nature is necessary because if no moths are sucking the sap of flowers, there will be pollination problems. Trees will not grow naturally in the forests. Due to the lack of trees, there will be a massive increase in soil slipping in the mountains, and even a little rain will cause widespread destruction. It is with this confidence that I am passing on my suggestions to you.

Rule 128 – Plantation of Trees – The occupier of a factory, employing ordinarily 100 or more workers, shall plant and maintain trees within the precincts of the factory. The number, type and layout of the trees to be planted shall be got approved by the Forest Officer of the area or any other qualified Horticulturist.

But, never to date has any officer paid attention to this in any inspection. Nor has any effort been made by the department in this direction.

Every municipal body and authority will have to ensure that while passing the maps of every house and any building, this matter is kept in mind, but strictness should be done on this subject. And should ensure its provision in every authority and body.

Banyan, Indian Fig, Peepal, Kadamba, Sivan, Arjun, Manvel, Bamboo, Neem, Karanj, Golden Bamboo and Kanchan trees should be planted on rivers, not bushy plants. A social audit of each department is done by a third party NGO. or by any other competent person.

Along with this, special attention should be paid to factories of hazardous category, even if only two men work there and that does not come under the purview of the Factories Act.

Like many dye factories running in tiny houses with only 4-5 people. And no strictness is imposed on them due to the non-implementation of the Factory Act. But they pollute the most. So for this, it is suggested, that Government should provide such people, with a place, to work in a group. And they should be registered, and a significant (standard) water treatment plant should be set up so that everyone's contaminated water is clean. In this way, there will be no burden on the small factory owners, as well as it will help in saving groundwater, rivers, ponds and the environment.

Children should also be motivated to plant trees. Or do any other work related to this subject so that they know its importance along with information in this subject and such children should be encouraged by giving some extra marks. But at the same time, it should also ensure that the trees planted are safe and socially audited.

This is a thought-provoking topic, and there should be a social audit of such people, too, because such people are throwing dust in the administration's eyes at the time of tree plantation. The plants are taken free of cost and then sold in nurseries at low prices. They are doing business with it.

If even one lakh trees are planted in any place, they will automatically attract people's attention. But planting trees only on paper will never bring greenery. Therefore, they should also do their audit from time to time through other means.

"There is a lack of awareness about relocating trees. This has to be taken seriously, and not only in Delhi but trees from across the country can be relocated. There is no need to cut trees; the administration should take out tenders for relocating trees. And to promote this technology. There will be no opposition to it, and it will not harm the environment.

I am sure that we can do a lot if the above suggestions are put into practice.